As I invariably slowly lose interest in my latest programming project, I decided a solution to my loss of programming mojo would be to contribute to a well-established open-source project, which already has good assets, a community, and a completed quality game that I might want to play as well as help develop.  Since I've also decided to start using other languages, it would help me decide which new language to start with.

So after a lot of Googling trying to find potential such projects, I came across a few.  Let's see how I got on:-


1) Teeworlds
This is a multiplayer 2D platformer with guns.  Unfortunately, on my 2Ghz laptop, the opening screen (a simple background and a box for me to enter my name) was too processor-intensive for even the mouse pointer to move at more than 1 frame-per-second.  God only knows how slow the actual game would be, if I could get to play it.  It looks very good though, so I was a bit disappointed.


2) XPilot
This is quite an old game (at least 10 years); it's a multiplayer Thrust variant.  The game was a bit jerky considering the simple graphics (even connecting to my local server) but the main problem was that none of the 20+ public server had any players online.  This is the big problem with multi-player games; they live and die by the players.  Once people slowly stop playing it, it doesn't matter how good the game is, it just slowly dies (assuming it had any players to begin with).

3) Unvanquished
I only include this here because it looks great, but doesn't seem to have anyone playing it.  It's sad to see that a game that looks so good and, if it plays as well as Tremulous did, plays well, should be struggling to find players.

Moving on from Java

After some consideration, I've decided to do all my game development in another language from now on, although I've not decided which yet.  This is for a few reasons:-

1) No native executable
I've never had an issue with Java's speed; the whole "C/++ is faster argument is irrelevant.  However, sometimes you just want to release an executable for the target platform without end users needing to install Java first.  How come there's no simple option to compile Java to an executable yet?

2) I Can't run 3D
The primary Java library for 3D (and most advanced graphics) is LWJGL, which although excellent, is unable to run on my laptop due to hardware limitations ("Cannot create window.." or something).  This means that I can't use JMonkeyEngine or LibGDX.  However, even something like WebGL will run 3D quite happily at a decent framerate on the same laptop.

3) No decent open source games
I periodically browse the web looking for an open source game written in Java that I can help contribute to, and I'm yet to find one that's almost complete and with a community.  Most seem to be in C/C++.  And there's certainly no "big" open-source flagship games written in Java.

4) Java is the defacto choice for Android apps, but the Play store is so swamped that getting anything noticed on there is impossible; and developing for Android makes things exponentially harder due to all the different devices that need to be catered for, and the constantly changing APIs.  Even Google can't manage to create apps that don't crash periodically.

Don't get me wrong, Java is technically my favourite language; it's clean, relatively straightforward and powerful, and has lots of helpful libraries.  But regarding open-source games, it's nowhere to be seen.

I was watching one of the excellent Kim Justice videos the other day, this one being about Sensible Soccer.  (If you like watching videos about games, especially of the retro variety, then I thoroughly recommend his channel).  It got me thinking, how come no-one has remade Sensi for the modern day?  After all, there are thousands of "retro remakes", and this game was incredibly popular back in the day. 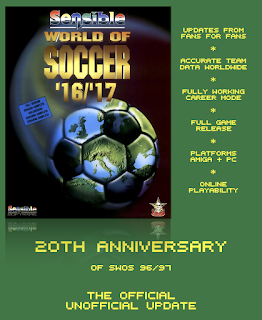 Needless to say, someone has.  (In this day and age, it's impossible to find something that someone hasn't already done, especially with regard to games).  It's virtually identical to the original, but with all new updated teams, online play, plus presumably loads of other modern improvements.  However, the main aspect of the game - kicking the ball around - remains as great as ever.  Which makes me curious why this game isn't more well known?  I guess that in this day and age, there is so much going on it's very hard for anything to get noticed.

The only "issue" I could find was a problem I had actually starting a game: the menu options are selected with Enter - apart from the one that selects "Start Game"!  I spent a while pressing every button on the keyboard, and also going through every other menu option, since I assumed I must have selected something that prevented the game from starting.  There was very little documentation (that I could find).  In the end I had to join the Chat channel and ask.  It turns out that Ctrl (which is the default "fire button" in the game) is used for this single menu option.  It would be a shame if this obstacle put off any other potential new players to this great game.
Posted by Steve at 6:00 AM No comments:

Why do forum moderators always feel like they need to stamp their authority when there's no reason to?  Users don't get paid to post messages, we do it usually to help other people and have a debate.  Unfortunately I've recently encoutered a sudden bout of forum nazi-ism on a few forums, where a moderator has shut down discussion and/or deleted posts with no obvious reason that I can see.

Stack Overflow seems to be the worst, presumably because there's thousands of wannabe moderators.  They're very strict with the rules (especially with what can and cannot be asked) and if you dare to ask something that's not allowed (or seemingly not allowed) you will be downvoted and your question probably closed.  Do you need an online compiler since your computer is too slow?  Then go somewhere else.  Are you a beginner at programming?  Then go somewhere else; answering easy questions is beneath them and you'll just get downvoted, along with a few unhelpful comments.  (It's interesting to note that often the questions that are closed as being "of-topic" usually get high votes).

Even the normally friendly World of Spectrum forums seems to have acquired a forum-Nazi.  I recently posted a link to a BBC article about the doomed ZX Vega.  The next day I couldn't find it.  I posted it again, also mentioning that the original seems to have disappeared.  I got the terse reply saying "It's been moved", and that discussions was closed, making me unable to reply asking why or where to.  Why close it?  Is WoS running out of disk space?  Or is WoS somehow linked to the shady goings-on with the Vega?

And don't even think about posting to the Subreddit "Explain Like I'm 5" without prefixing your title with "ELI5:", or your post will be deleted immediately by a computer.  Presumably it's beyond the job of a computer to automatically do this, and they'd prefer to get humans to do it.  I don't know why they feel that their subreddit is so important the posts need differentiating from all the others.

Moderators are often required for when arguments get out of hand, but unfortunately, some of them seem to feel that a moderator's job is to control the discussions, or even just create arbitary rules to give them a sense of power.
Posted by Steve at 7:07 AM No comments: 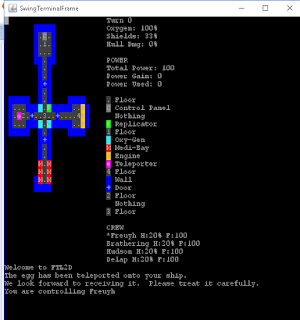 Full source at https://bitbucket.org/SteveSmith16384/ftlrogue
Posted by Steve at 2:57 AM No comments: