Like every other human being on the planet, I am a big fan of most Julian Gollop games, and the pinnacle of these are obviously Laser Squad and Chaos.  I've "tributed" Laser Squad with Stellar Forces, and now it's time for some Chaos.

My new app is called Sorcerers.  Like Chaos, it's a multi-player game where each player takes control of a wizard.  Each wizard has some spells which they must use to destroy the other wizard, and the winner is the last wizard left standing.  The spells range from fantasy creatures like a Wraith or Golden Dragon, to Magic Fire and of course Turmoil and the dreaded Gooey Blob. 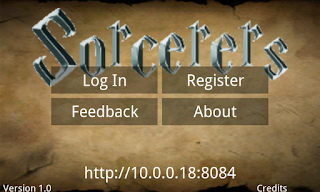 There are a few changes to the original: there are more variety of spells, and turmoil doesn't crash the game.  It's currently 2-player, but will be increased soon to up to 4 player.

There's a really annoying bug in Jellybean, and I can't work out how to get round it, so I'm posting it here in case someone else has come across it and knows a solution:-

I've got two .png images in my app, both identical except for the name and I've changed one of them to be "bluer" (using Gimp). However, Jellybean refused to draw the bluer one. (I'm having trouble with other random images as well). There are no errors, and it loads the file okay, but nothing appears. I've tried swapping their names. They're both only 57x57 pixels, so it's not a memory issue.

Someone else has posted the same problem on Stack Overflow, but as of now there are no replies.

It's driving me mad!  How can something broken like this end up being released onto millions of mobile phones?


UPDATE: I've found a workaround!  Copying my images into /drawable-nodpi, seems to have solved it.
Posted by Steve at 1:15 AM 2 comments:

One thing that is starting to annoy me is the number of services that start out free, but then as soon as they become popular they introduce paid-for features while slowly reducing the free features until they are virtually useless.

The stock response to this is "well, it's free, what do you expect?".  However, this oversimplifies the issue and ignores all the other aspects of the problem.  Most important of these is that I've recommended these services to others, thus giving the free service its userbase.  My comments on these services are still on the internet, but I wouldn't recommend them now.  I've also spent my own time incorporating their service into my apps and my time isn't free.  Their services are now so entwined in my apps that it's going to take me lots more time to remove them and find alternatives.

I've got no problem with these services charging for extra features, but reducing the features that were there originally is almost tantamount to blackmail.