I've decided to do another remake! "Pray tell!", I hear you say. "What game have you decided to direct your God-like programming skills at this time?". Well, the following screenshot should make it pretty obvious:- 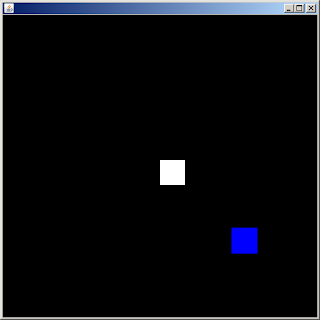 Okay then, maybe not. Here's a few other hints: it's a top-down view; the blue square is a wall, and the white square is either a warrior, wizard, elf or valkyrie.

You should have got it by now. Yes, it's going to be a Gauntlet remake!

In order to get something up-and-running as quickly as possible, I've forgone graphics for the time being. Despite it not looking like much, the white square can be controlled in 4 (count 'em!) directions, and all the sprites have collision detection. I've developed a way to have as many sprites as possible on screen (and across the whole dungeon) without slowing down the collision detection or the frame-rate. It works with just two (as proved by the screenshot), so I don't see how it can fail with 200 or more. I may patent it, so details cannot be revealed just yet.

Next step: Ghosts (or grey squares).
Posted by Steve at 12:34 AM No comments: