I've used the same graphics engine I used for Stellar Forces and Assault Squad to make another new Android game: Outpost Omega.  In this realtime strategy game you must defend and maintain a moonbase for as long as possible against a range of problems, including meteors and invading armies.

You start with 6 armed units and some medibays.  These used power, and over time resources are dropped that must be collected to maintain the power levels.  There are also other factors that make life harder: meteors will randomly crash into the moon starting fires which must be extinguished.  In addition, enemy invaders will attack your base and must be repelled. 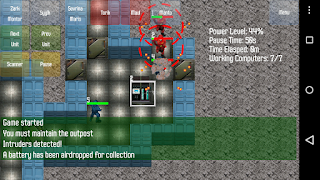 The layout of the moonbase is randomly generated each time to give each game variety, and there's loads of tension as you send out a unit to collect resources outside where they are exposed to attack.  It's a great game if you've got a spare 5 minutes, and completely free!
Posted by Steve at 4:51 AM No comments:

I'm all about saving time, and here's a great tip for any Android developers who need their own website to promote their games, but haven't got the time to create one: let someone else do it for free.

Let me break it down into easy steps:-

1) Google your "company name" and follow the links.  By "company name", I mean whatever name you gave Google when you set up your developer account.  If you follow the links, it shouldn't be long before you get to one of those app aggregator sites, with all your apps nicely listed on one page.

Here's a few I found when I googled my own "Penultimate Apps" name:

Frankly, they've done a much better job than I could.
Posted by Steve at 6:23 AM No comments: