I had another idea for a game which I've started and now stopped for the usual reason. Originally, I was going to write a 3D FPS that doesn't use models, since it is a massive ball-ache trying to find appropriate models on t'internet. Instead, I thought about just using basic shapes or something, but because they are basic I can make them more animated: moving platforms, floors that go up and down, walkways that extends and then retract, you get the idea. Actually, writing about it now makes it seem like a great idea, so maybe I'll come back to this one. I'm thinking something like Mirrors Edge with a constantly changing environment.

Anyway, the idea then transmogrified - the kind of games that already use this "simple shape" theory are all the old classics - Breakout, Pac-Man, Tetris. Their graphics were nothing special but they were good games. So how about a game set inside another game? Maybe this screenshot will give a better idea of what I mean: 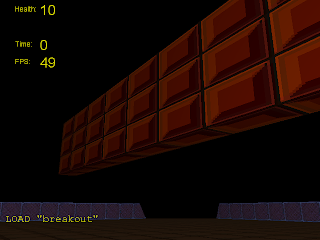 Those blocks are supposed to be the blocks in a game of Breakout. I intend to have a bouncing ball and maybe the puck. The player would walk around in an FPS-stylee, and maybe shoot all the blocks while avoiding the puck or something.

I even got as far as starting a Pac Man level: 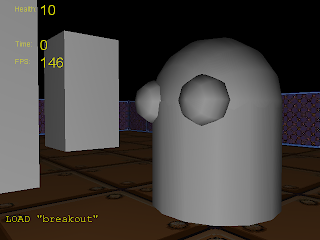 I think it was this level that started eroding my enthusiasm. I realised that this game is going to take a lot of time to create all the 3D models for each level/game. Then there's the AI for all the unique enemies, the level design etc etc...

So I decided to (maybe temporarily) abandon it in favour of another game idea; an idea that uses simple graphics, no advanced AI, and is incredibly addictive. As soon as I have this idea, I'll let you know. Meanwhile, it's back to the Spectrum Arcade for inpiration.
Posted by Steve at 12:42 AM No comments:

Someone has used one of my ideas!

It was surely only a matter of time, since I have so many great ideas. However, to quote from this very blog from July 19th 2006, where I described a time-travel game device: "To give you a more concrete example, imagine Command and Conquor with time travel".

Lo and below, fast forward to 2009 and what has happened? Achron: "a real-time strategy game where players and units can jump to and play at different times simultaneously and independently".

It's been a bit quiet on this blog lately. I got a bit bored of writing games that no-one wants to play. However, I've got a new burst of niavity and/or optimism, so I've knocked up something new in the vain hope that someone else might find it interesting.

Todays effort is an FPS by the name of Xenogeddon. It's basically Space Hulk by another name. You walk around an "abandoned" (read: not completely abandoned) and shoot stuff that looks like it might want to kill you.

True to form, it's not actually finished, but is certainly playable.
Posted by Steve at 5:36 AM 1 comment: