I call it a "megaproject" since I'm pretty convinced I can see this one through to the end without getting bored or sidetracked onto something else.

It's called Worldcrafter. In a nutshell, it's a 2D Minecraft-style game for Android. Yes! Another one! This is what it looks like so far, after about 5 days since I started (most of those days being spent trying to decide what to call it):- 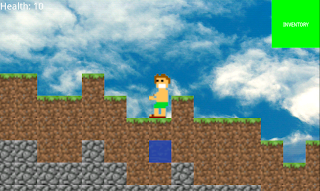 Does the world need another Minecraft game? I'll let the world decide. What I like about writing this kind of game (and what I like about Stellar Forces) is that it's almost "modular". You (i.e. me) can play a bit, then think "ooh, wouldn't it be good if it did this". And then add it. However, the basic game is quite easy to get up and running, and that's the important bit when starting a new project: have something playable ASA-goddam-P.

If you've ever tried finding a domain name for your new project, no doubt you'll have come across the problem of cybersquatters, the vermin that polute the internet with ad-farms by buying up any and all domains that might be remotely useful for anyone. The rest of us have to try and think up obscure domain names that still try and relate to whatever subject our website is about, and hope people will still be able to find our site on the net.

Of course, you can usually buy a domain back from them if you want, using one of the their very helpful "make us an offer" forms. Gee, thanks. You're doing mankind a service.