In my effort to single-handidly save Applets from obscurity, I have just finished the first working version of my new RTS applet, called Tremulous Hulk (because I intend it to become like a 2D Tremulous, but have ripped Space Hulk sprites). 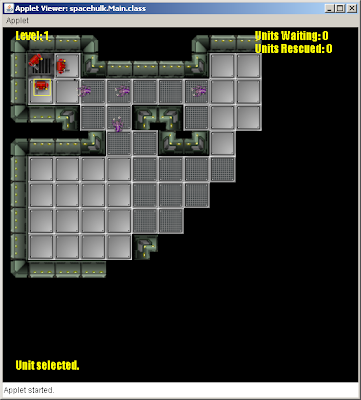 It's very basic at the moment, but in true open-source fashion, I have big plans, culminating in something that will take on World of Warcraft for player-base size.
Posted by Steve at 7:03 AM 1 comment: 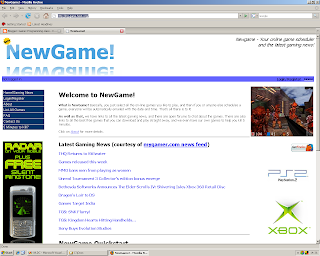 As an exercise in seeing if I could do it, I decided to write a web server several months ago. HTTP seems pretty straight forward in principle, but programming it can get bogged down if you accidentally send too many CR's and/or LF's. Also, closing connections is a problem, since clients like IE and FF often don't bother.

However, it now seems to be working, and I can officially announce what I think is a website with an original idea!

I've called it NewGame, and it's an "online game scheduling service". Basically, users select which online games they play. Then, when one user schedules an online game, all the other users who have selected that game will automatically receive an email telling them to date, time, and server.

I thought of this because a common problem with online games, especially new ones and the less well known ones, is that they are often bare of human players. Online games are brought alive by other players being there at the same time, and hopefully my solution will help this to occur.

As well as that, in order to give the site more content, it also has the latest gaming news headlines courtesy of a randomly selected news site. There are also forums for each game, and in a nod to free games, they are highlighted as such, so players can download and play them straight away. And finally, it's going to be the platform for my latest foray into bringing applets back from the brink of extinction!
Posted by Steve at 6:34 AM No comments: 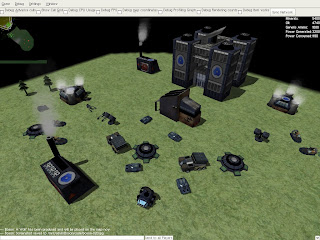 I don't spend all of what little spare time I have on programming. Sometimes I even get to play some games. With this thought in mind, I decided to look through the Ubuntu games repository and see what strategy games were there.

I came across Boson, which I'd given a few seconds of my time to before. After installing it (which, thanks to Synaptec, is so easy anyone can do it blindfold) I started the game.

This is where the problems hit, and this is why I only gave it a few seconds last time. Visually, the game is great; I could only dream of one of my games looking this good. But how do you play it? My first (and probably only) port of call was the website.

Unfortunately, on the website:-
It's a pity really. Like I said, it looks like a really good game, but they are shooting themselves in the foot by not telling anyone how to play it.
Posted by Steve at 4:46 AM No comments:

An addendum to my previous post: there is one drawback to applets, and it is that no-one takes them seriously, even when they are good.

Even the forums of the excellent Freegamer blog lumps them in the category "Proprietary & Web Games" (with the subtitle "Just in case you really have to talk about them... "!?).
Maybe the problem is that there's so many rubbish games out there? Do a simple search, and you'll probably come across a million versions of Sudoku, and applets that were written back in 1995. However, there are plenty of good games out there.

Maybe what the genre needs is something like Freegamer, but dedicated to online games, to sort the wheat from the chaff. Hmmm...
Posted by Steve at 2:02 AM No comments:

Every time the subject of applets comes up, people insist they are dead. Why don't people like them? In one of Joel's latest postings, he mentions applets being dead because they are slow (despite the fact that the thrust of his post - that you shouldn't bother to optimise, but rather wait for technology to catch up - contradicts this).

I think people misunderstand applets. They were not designed to provide banner ads or simple flashy icons. We've got Flash for that (which is why I have FlashBlock installed). Applets are designed for full applications and games that are comparable to any shrink-wrapped software. And if you do compare them to "normal" software, they come out favourably.

The beauty of applets is that you don't need to install anything, but you've got a feature-rich application, or in-depth game, sat there straight away ready for use. And applets are far from dead - there are tons of them out there, and for the time being it's going to be my platform of choice.
Posted by Steve at 7:18 AM No comments: 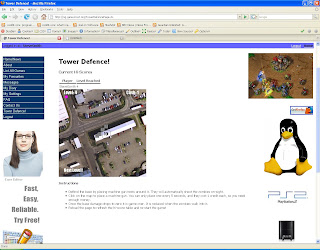 I feel like I've had an epiphany. I was at a low, and now I've seen the light.

I'd spent an hour or so on one of my games (Passenger) trying to optimise the map so that if there were (say) four mapsquares next to each other, all of the same type, it just drew one big square. For various reasons it was taking far longer than I expected. (This is always bad news - one thing I've found guaranteed to get me annoyed is when a task takes much longer than anticipated. That's why I now always assume everything is going to take ages).

Anyway, I suddenly thought: "Why am I spending my time doing this? Writing open-source games? I'm not actually enjoying it, I don't get paid, and (to be brutally honest with myself) I don't even play my own games myself, and I don't think anyone else does."

Basically I'd just become fed up with fiddling around with games, trying to fix bugs, optimise graphics etc. etc. The best part of writing a game is before you start, when you have a blank canvas in front of you, and an image in your mind of how amazing the game is going to be. Once reality sets it, it all comes crashing down after you've spent several hours (or days, or weeks) of your time. Even if a game is finished, then what? There are a million games out there all vying for attention. Why should players spend any time on mine, when it's obvious to anyone that there are better games out there?

Anyway, after a few days of thinking about it, I have come to a solution - Casual Gaming(tm)! Casual Games are much easier to write, and also it means I can play against my colleagues at work, and gain instance gratification to know that the game has brightened up their lives.

My first casual game was (another) version of Tower Defence (yes, not very original). It only took about 3 hours to write, and being a Java applet, it means it's very accessible. In fact, you can play it here. (You do need to log into the website I'm afraid though, but I may change that).

Programming "casual games" means that I can spend far more time designed and tweaking the games and far less time on boilerplate programming and sorting out bugs. And get back to enjoying writing games.
Posted by Steve at 1:09 AM No comments:

* When looping through the sprites in your game to check for collisions against each other, you check a sprite for collision against itself, which is why the sprite always collides with something immediately.

* Also, forgetting to implement special code to ensure that two sprites that shouldn't collide, don't. Typically, when a sprite shoots a bullet, the bullet will start on top of the shooting sprite, causing a collision immediately when the bullet is fired.
Posted by Steve at 8:16 AM No comments: